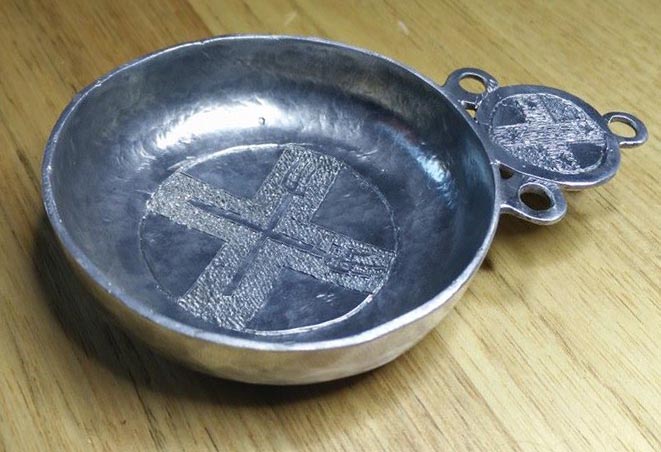 Not everyone was present for the full tasting hence the total votes changed from time to time. There was no official business so we got straight into the tasting.

18 brews were entered over 5 categories. There was a tie between Rohesia with the Metheglen and the Red Zoned Avoncider, and Timothy with the Sweet Mead and Dark Rum. The tie was decided by the on site brew off, using our own home made malts. A public tasting ended with votes 28 to 13 in favour of Rohesia’s Gruit Ale, over Timothy’s Barley Malt Ale, giving Roheisa the Canterbury Faire Tasting prize for 2015.

Rohesia’s Elderflower Champagne <2%
As per last year, Lemoney with a good elderflower nose. Well liked by the Guild and the populous.
Category WINNER by default.

James’ Meant to be a Bitter
Added too many hops. Primed and conditioned in the bottle, would have been better cold.
Votes 3 positive, 7 neutral, 12 negative.

James Black Death
Way too much chocolate malt gave a LOT of colour, but not a lot of flavour
Votes 6 positive, 8 neutral, 2 negative.

Rohesia’s Serpent’s Kiss Cider
Fermented on the fruits own yeast. A mix of backyard apple varieties. “First mouthful is bitey then it grew on me”
Votes 15 positive, 7 neutral, 1 negative.

Rohesia’s Redzoned Avoncider
A mix of backyard apples scrumped for the earthquake damaged suburb of Avonside, fermented on the fruits own yeast. Back sweetened with Quince syrup. Votes 22 positive, no neutral, 3 negative.
Category WINNER. Also won the Brewers guild Cider competition held during the A&S display.

Rohesia’s Redzoned Crabapple Cider
A mix of crabapples and Red delicious with some Japanese Quince, fermented on the fruits own yeast.
Votes 6 positive, 8 neutral, 5 negative.

BREWED ON SITE ALES, as voted by the populous who tasted them.

Rohesia’s Gruit Ale
Using our home made pale malt, Heather (from Timothy’s garden), Sweet woodruff (from Rohesia’s garden) and Yarrow picked on site. Sweetened with honey and using a Belgian Saison yeast. Yeast was pitched on the Tuesday evening of Faire and the ale drunk on the following Saturday afternoon.

28 votes from the populous.

Timothy’s Barley Ale
Using our home made malt, some of which was toasted on site on the Sunday of Faire and using a Belgian Saison yeast. Yeast was pitched on the Tuesday evening of Faire and the ale drunk on the following Saturday afternoon.

13 votes from the populous.

Our thanks to all who took part.